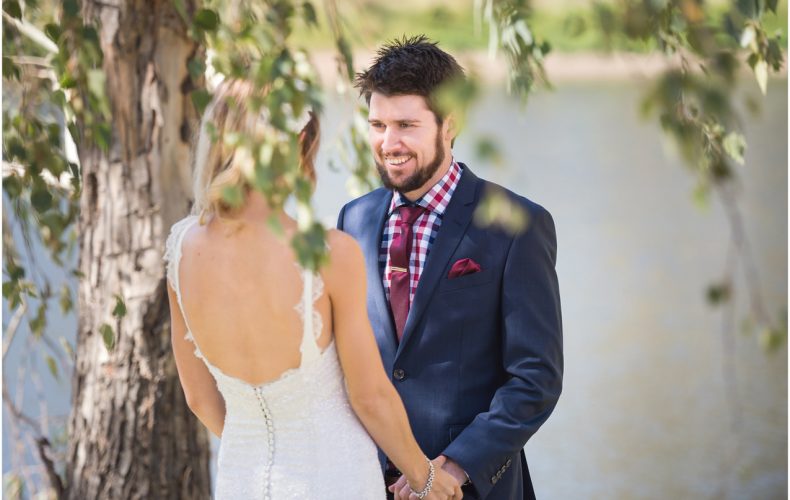 You might be a traditional bride who would prefer to do things the way they have always been done – by meeting your groom at the end of the aisle, and no earlier. But you may have noticed a trend of ‘first look photos’ and be a little intrigued. I know, that if you open yourself to the opportunity, you won’t regret it!

What brides really want on their wedding day is a reaction from their groom…but as they nervously wait down the end of the aisle and away from the one that makes them calm and brave, it’s not really an environment for over excited emotions to be expressed and you could end up disappointed. Basically, grooms normally become incredibly nervous on wedding days…. even if they seem cool and collected. For most grooms, the nerves kick in before they see their bride because when they see her, everything becomes VERY real! So when the nerves start creeping up, instead of keeping the groom in a secluded space until his time to enter the ceremony, what if you took him to a private place… no people, no on-lookers, no distractions…. and you let his beautiful bride, the love of his life, walk up to him and gently tap his shoulder. He would turn around and finally get his first look at his stunning bride and not only would he get to see her… he could embrace her… cry with her…. kiss her… and ENJOY that moment with her for as LONG as they wanted. As she shows him her dress, twirls a few times and then asks him what he thinks… his nerves start to diminish. After all, she’s the one that can make him most comfortable anyway.

Because they aren’t on a time crunch… they casually move into their romantic portraits. No one is around and there is no pressure; it’s just the two of them and their photographer….. capturing the excitement and the joy of their wedding day. This is their time to be TOGETHER…and to be ALONE. When does that happen on a wedding day? Without a First Look…. it doesn’t. When their time alone is over, they meet up with the bridal party and with plenty of time to spare the bride touches up a little makeup while the boys act like boys. After a few minutes the bridal party portraits begin and they’re FUN. They’re FUN because there is time to make them FUN. There aren’t any guests waiting impatiently at the cocktail hour and there isn’t a DJ coming to find the photographer to get a time check. It’s wonderful!

After portraits are done, the girls and guys separate and prepare for the ceremony. The guests begin to arrive and the ushers are in place. Pretty soon it’s time for the processional music to begin and one by one, the bridesmaids make their way down to the front of the ceremony. As the groom clasps his hands… they aren’t clasped out of nervousness but excitement. The music builds, the mother of the bride stands and all of the guests follow her lead. The groom looks up and here comes the BRIDE! His best friend, his companion, his sweetheart…..she’s stunning…. ABSOLUTELY stunning. The closer she gets, the bigger he smiles. This is it.