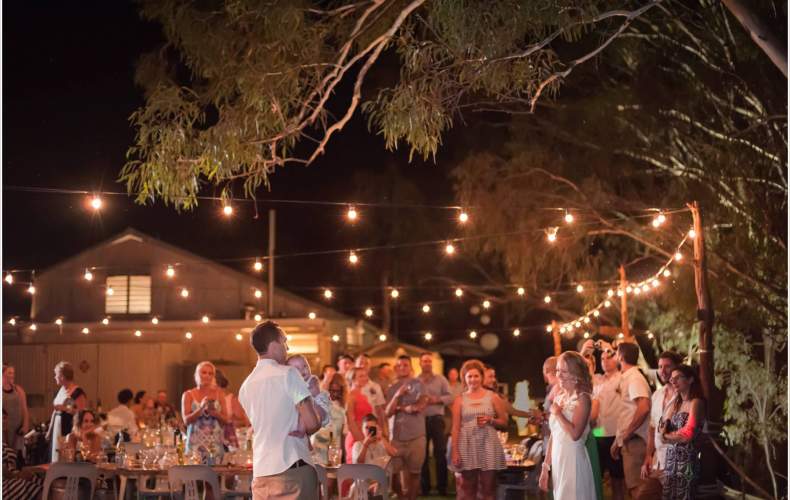 The story of this couple spans many continents, but it is one that continues on with their wedding in the Riverland. Warren and Leanne are two people not afraid of an adventure, and it was on one of these travel adventures that they met. “It was Warren’s first night out in Australia, he was back packing, and I had just moved there (to Sydney) 2 days prior.” They met in a nightclub, and hit it off so immediately that they spent the morning watching the sun rise from the cliffs of Bondi. What a quintessential beginning to their Australian romance. Two weeks later, Warren declared his love for Leanne.

“I had planned the proposal for around 6 months. I had to order the ring from the States and get it delivered in Hong Kong, secretly picking it up at the same time as I played a touch rugby tournament”. They then spent time trekking through Tibet (for those keeping count, that’s 4 countries so far!). “Following a huge climb to 5200m we descended down and crossed through a picturesque mountain stream, we stopped to chill out and enjoy the sun and scenery and I popped the ring on her finger!”

“It was beautiful, he couldn’t have picked a better place. It was very unexpected.”

When they were asked what they wanted to remember about the two of them right now, when they look back in the future, their answer really sums up the people I’ve found them to be. “We were willing to take a chance on an adventure. Hence we currently live in China!”

That’s right; somehow thanks to the power of the internet, Warren and Leanne found little old me from China, ready for their wedding in the Riverland! It was set to be an amazing wedding, using their love of travel, nature and Australia to inspire them during the planning. Australian themed food was on the menu, and there was to be a 2 weeks wedding tour with visiting family and friends – in fact it was going to be the first time the families were to meet – 8.5 years since the love story began.

I got some time to sight see through the Riverland the day before, so I went for a drive on what turned out to be a 4WD track and thought I better find a way to turn around so I didn’t get a flat tyre! I didn’t get a flatty, BUT I did have a run of bad luck – I pretty well ruined the pins in my D4 compact flash slot on the Friday. Not ideal, but not the end of the world when you have back up gear. When photographing details of the wedding the next day, I took my shoes off like everyone else on the houseboat….and stubbed my toe on my camera. Nikon sure make them tough! There was blood everywhere but I didn’t want to bother anyone so I just soaked it up in a towel I had with me! I was waiting for the third thing to go wrong, and after seeing a few people slipping while walking to the houseboat, I was worried that it would be next with my 40kg of equipment tumbling down the slope and then into the water; but thankfully nothing of the sort happened, and instead I enjoyed a beautiful outdoor wedding in the Riverland!

So back to that wedding!

The story of Leanne and Warrens wedding day begins on the houseboats that they were getting ready on (a first for me!) before their late afternoon wedding. I met with the girls as they were getting their make up done, and the light poured in through the houseboat windows; it was perfect for our natural photography and of course their make up colouring! It was a lot of people in a small space though, and the bridesmaids were contending with people coming up and down the hallway as they tried to iron them!

There was a quick trip to meet the boys while they sorted out their button hole flowers and the grooms’ (Wazza!) super cool bowtie, with a few photos for the wedding album, before it was back to the girls who were finishing with their hair, a little nail painting, and gifts for the bridesmaids. When Leanne got into her gorgeous lace wedding dress we made sure we got some photos of her and her sweet daughter Molly; these are special wedding photos of mother and daughter that they can cherish forever.

The riverside ceremony was a relaxed affair, while they waited the boys in their shorts stood at the end of the aisle laughing and joking. What I found about Leanne and Warren on their big day was that they were so laid back; they were more worried about other people before themselves! They had even brought along a tonne of funky bright Ray Bans which were perfect for the outdoor ceremony, and fans with water misters in the woolshed brewery on the very hot day!

Everyone looked so smart coming down the aisle, and then there was Leanne, stunning in her keyhole back gown, holding onto her beautiful Molly, arm in arm with her dad (who held onto her bouquet). The smile on Warrens face was enormous and they looked adoringly at each other the entire ceremony.

Surrounded by friends and family, some of which had travelled from the UK, and with the river as their backdrop, Warren and Leanne were married in a heartfelt ceremony, with a brilliant celebration from the bride when they were finally announced husband and wife! As they were doing all of the planning from China (I so need to get my passport) they had help from Jess, from Mint Event Management, who helped them arrange an outdoor wedding reception – one that I had been so waiting, wishing and wanting to capture! I loved all the wooden signs that decorated their ceremony and receptions, including one that pointed in the direction of the booze, the lawn games, and their homes many thousands of kilometres away! No matter how many kms you are away, you always come across someone you know – as I did when I met someone from Ceduna at the wedding. Crazy!

I really, really, REALLY love outdoor receptions, so I loved to photograph this one, and everyone was up for a lot of fun. The photobooth props in the polaroid style frame were hilarious – especially the ‘your mum likes this’ sign with the FB thumb. Classic. The most comical moment of the night? Well that was when Wazza let everyone know in his grooms speech that one of the first things he said to Leanne was…’can I didgeridoo you?!’ It sounded even funnier in his accent!

As the sun set over the river and their outdoor wedding reception, we took some time to get some sunset photos, and they turned out beautifully, if I don’t say so myself! Guests dined under strings of lights, Warren and Leanne cut their cake with great enthusiasm, and then newlyweds danced on their grassy dancefloor, soon joined by their daughter, together celebrating the start of the rest of their lives. Thank you so much for letting me be a part of it, I hope you love your slideshow xx